Time for my second post of my Yorkshire Dales trip.  As I alluded to in my last post about Malham Cove, one of our goals for the trip was to visit Gaping Gill.  Sadly this wasn’t open due to a technical fault, so instead we visited the nearby Ingleborough Cave.  One thing to note is that this isn’t a potholer’s cave, it’s a show cave.  My own potholing experience amounts to a trip down an abandoned slate mine in Wales…anything more adventurous and I’m likely to become a troglodyte.  Oh and apologizes for the quality of some of the images, it’s a little hard to take photos in the dark cave light.

Location & Access: To get to the cave, park in the village of Clapham, just off the A65.  The cave is about 2km north of the village located around 54*08’05” North, 2*22’38” West.  To get to the cave you follow the path north out of the village.  The path is wide and in very good condition (rather bizarrely a toll path too so bring some pennies), so you shouldn’t have to much trouble walking to the cave.  Sadly there is no closer public vehicular access, so you’ll have to walk.  Being a show cave, Ingleborough Cave is geared towards families, the access is good and the cave floor has been given a layer of concrete to allow disabled usage.  This doesn’t spoil the aesthetic to much.  The tour of the cave does involve a guide and will cost money some bring some cash.

Geology:  The cave is in the bedding planes of the Garsdale Limestone Formation (331-339Ma) and like Malham Cove it was once a shallow, carbonate sea.  In some places you can actually see the fossils of the coral and other organisms.

The cave was carved out by river water and was partially filled in by glacial till, some of which has been removed to open up the cave.  Not all of it has been and the full extent of the cave is not yet know.

Excavations are still on going and have brought up the remains of a woolly rhinoceros tooth, from the Devensian Glaciation (about 10,000 years ago).

There are several underwater pools still in the cave, and the cave itself is regularly flooded when there are heavy thunderstorms.  When the cave was first explored in 1837 it was flooded, the water held back by a calcite dam.  This was blasted to drain the lake at the time, but parts of another calcite dam can be seen.

The historic level of the cave water is marked out at a level where you find the cave coral deposits below the waterline and the flowstone above. 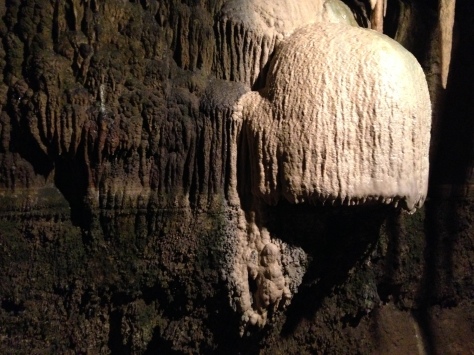 There are plenty of stalactites and stalagmites in the cave of various sizes, the biggest of which is The Sword of Damocles and is a few metres long.

Along with these you will see plenty of helictites and speleogens as well as other cave formations.  A look at the feature image to this post shows how the natural cleavage & faults in the rock are exploited by the water and form the basis of the stalactites.

Overall this a good cave to visit, especially if you are not an experienced caver, and a good alternative to Gaping Gill if the winch is broken.  It’s a show-cave, but a good one.  There are plenty of formations to see, and if you are in the area I would recommend visiting the cave if you have a spare couple of hours.  They also have a good website explaining the cave and showing more pictures at www.ingleboroughcave.co.uk.

Reference: The Geology of Britain; An Introduction by Peter Toghill (2006), Geology (2nd Edition) by Stanley Chernicoff (1999), http://www.ingleboroughcave.co.uk and the tour guide on the day.

One thought on “Ingleborough Cave”