In case you haven’t heard a new member of the Tyrannosaur family has been announced last week from southern China – Qianzhousaurus sinensis.  This new beastie is from the late Cretaceous (70-66Ma) and has led to a revision of the Tyrannosaur family group.  A Tyrannosaur family?  Yep.  Most people are only familiar with the large Tyrannosaurus rex, in fact if you asked the average person on the street to name a dinosaur then T. rex is likely to be the first (and sometimes only) one they can recall.  The reality is that the Tyrannosaurs form an entire family of predatory dinosaurs (theropods), some small, some large.

The reason that Qianzhousaurus sinensis has made a change is that previously there were 3 main divisions in the Tyrannosaurs – early Tyrannosaurs found in both Europe & China (including Aviatyrannis jurassica from late Jurassic Portugal, the UK’s Eotyrannus lengi and China’s Dilong paradoxus).  These are characterised by their small size (often less than 1.5m in length), less powerful jaws and the presence of more than two figures seen in the later Tyrannosaurs.  Other features; in particular the shape & structure of the hip confirm that such small creatures are Tyrannosaurs and may represent the ancestors of the more familiar giants.  The second division is the Albertosaurinae which includes the species Albertosaurus sarcophagus and Gorgosaurus libratus.  Though larger (7-8m in length) these Tyrannosaurs are slender & graceful and are found in the western USA and Canada.  The age of the rock seems to suggest that A. sarcophagus and T. rex co-existed.  The final group is the Tyrannosaurinae and includes the largest members; T. rex, Tarbosaurus bataar, Daspletosaurus torosus and the much smaller Nanotyrannus lancensis.  These Tyrannosaurs have the familiar two-fingered hand and large skull with the powerful, bone crushing jaws.

So where does the new  Q. sinensis fit in?  Well there are a few Tyrannosaurs of uncertain lineage; Alectrosaurus olseni and Alioramus remotus.  Both are from Mongolia and although their features point to them being Tyrannosurs, they showed some different skull characteristics.  To illustrate my point take a look at the images below. 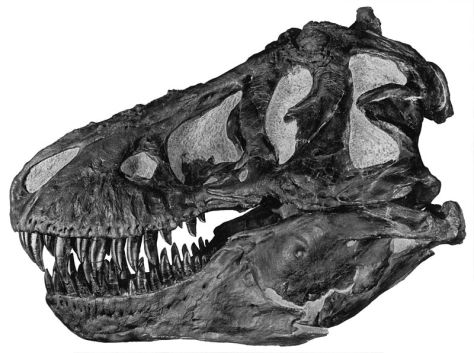 This skull is of the T. rex.  It has the familiar big, bulky shape that so many people think of.  Now compare this to the skull of A. remotus.

A. remotus’ is much thinner and longer, and has a characteristic set of bumps on the top of the skull.  This was only to be found in A. remotus, but no other Tyrannosaur.  Well have a look at the skull of Q. sinensis.

The skull is long, thin and has nose bumps similar to A. remotus.  This suggests that the two creatures are more closely related to each other than to other Tyrannosaurs.  Thus there is another branch in the Tyrannosaur family tree – one of longer snouted predators.  This is cool, and if you’re into dinosaurs as much as I am is really exciting (what did you expect, I’m running a blog called geogeek).

If you want to know more, the Wikipedia entries of Tyrannosaurs aren’t too bad.  If you want a more serious publication then I can highly recommend The Dinosauria (2nd edition) edited by David B. Weishampel, Peter Dodson and Halszka Osmolska (2004).  I know it’s a few years old, and could do with a third editon to include some of the more recent discoveries, but it is a very comprehensive tome and is a must for the more grown up dinosaur lover.  And of course all recent discoveries are published in the relevant peer reviewed journals.

Just to clarify, the images of the Tyrannosaurus and Alioramus skulls came from Wikipedia, whilst the the images of Qianzhousaurus came from sci-news.com.  The extra information in the text came from above mentioned The Dinosauria.