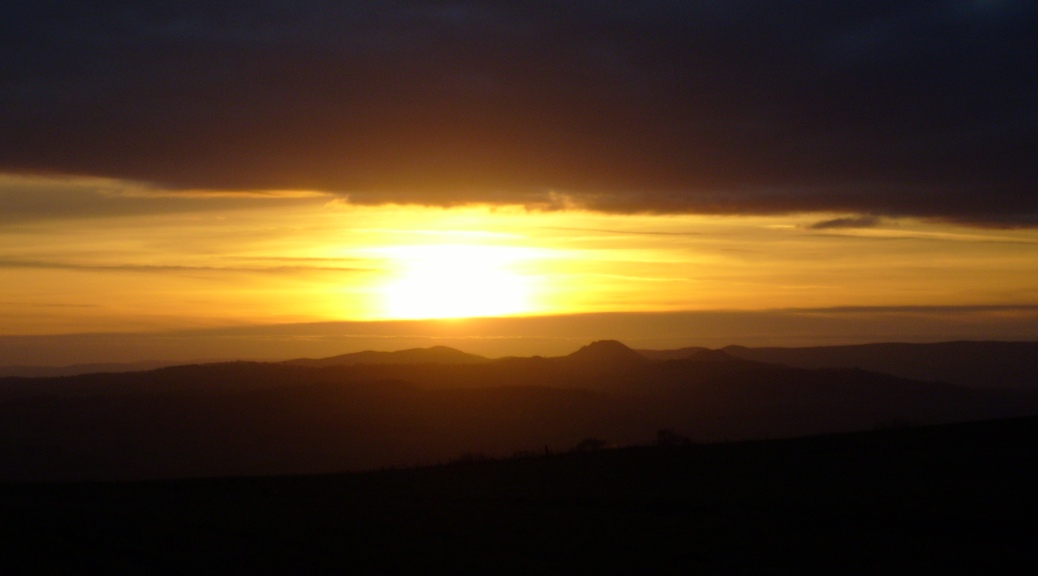 As part of my geological time series I thought I’d have a look at where rocks/features of the periods can be found in Shropshire.  Shropshire is a very geologically diverse county and if you look hard enough you can find examples from all of the time periods except for the Cretaceous (though the Tertiary is a little dodgy) .  I will say that the examples I am giving are not the only ones to be found in the county.  There are many other formations, rock types and sites that can be used to represent the time periods, I’ve just pick a selected few.  So prepare for a few explanations and quite a lot of pictures.  Just as a remind ma stands for millions of years ago.

I’ve included a brief timeline and a small map giving the rough location of the sites I visited (blue circles) with the major towns in the county for reference.

As we are still living in the Quaternary then many landforms can be seen to represent what has and is still going on in the county.  For a more pre-historical landform a good example would be the glacial relics, of which the kettle holes and peat bogs around Ellesmere would be a good place to start. 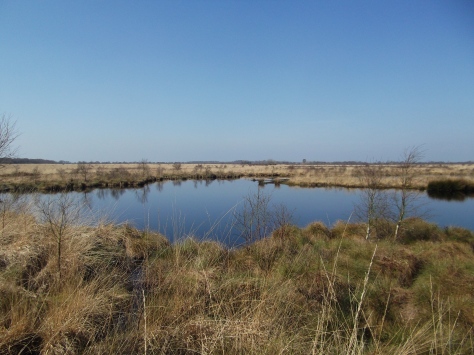 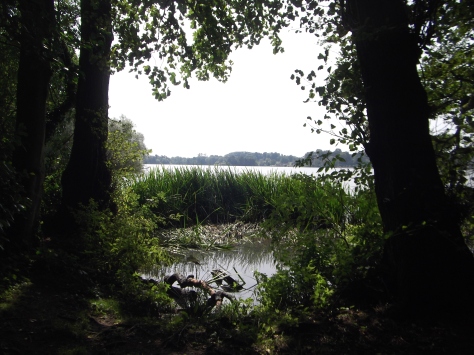 These features were formed after the ice of the Devensian Glaciation retreated around 11,000 years, leaving layers of sand and gravel (commonly called glacial till).  The kettle hole forms when a block of ice falls of the retreating glacier and melts, leaving a water-filled depression.

Sadly these formations are missing from Shropshire.  There is rumour of a Tertiary (possibly Neogene) outcrop near Whitchurch, but I haven’t been able to confirm it and I can’t find it on a map, so for now it’ll have to remain a mystery.

You’ll be lucky to find this one.  There is only one real outcrop of Jurassic age rock in the county and that is around the village of Prees, about 5 miles south of Whitchurch.  There is some Jurassic bedrock under the layers of glacial till, but Prees is the only place it comes to the surface.  You can see one exposure, just east of the A49.  To get to it you can follow a public footpath.  The rock is mudstone from 183-190ma and the environment was once a shallow, tropical sea. 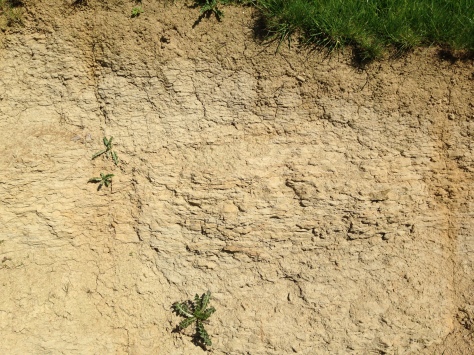 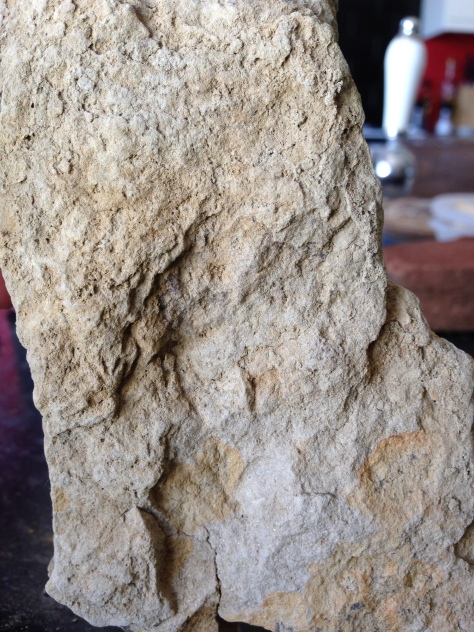 The Triassic and Permian are both present in Shropshire, but the exact boundary has caused a little confusion in the past.  This is largely down to the similarities in the formations and the fact that they rest one on top of the other in the same locations.  Personally I think the best place in the county to see both Triassic and Permian is around Bridgnorth, though there are some other impressive red-rock formations that form several ridges in the north of the county.  The Triassic rocks are to the east of Bridgnorth, further up the hill and form part of the Kidderminster Formation.  It is mostly made up of red sandstone and conglomerate.  The image below is that of an exposure on the A442 near Allscott, just north of Bridgnorth and shows a layer of conglomerate sandwiched between two layers of sandstone.  It is a good example of cross-bedding between the strata and is representative of a river running through a desert environment. 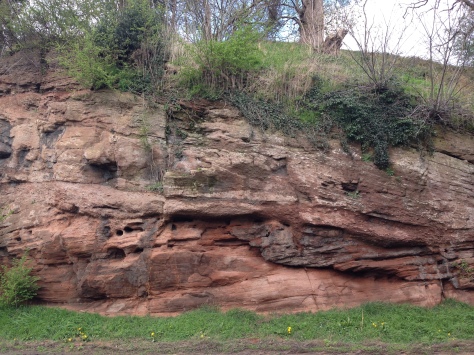 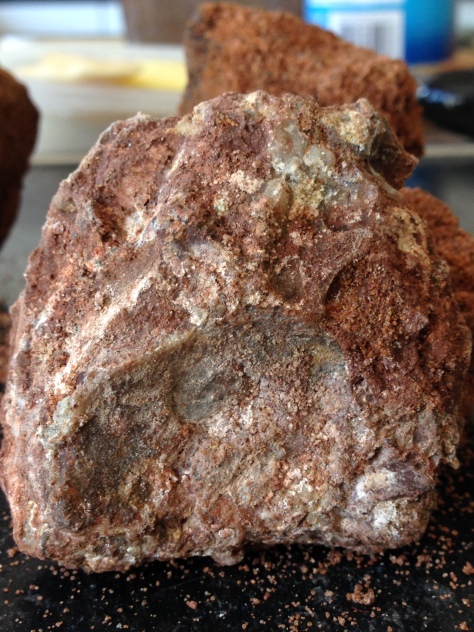 As I said in the Triassic section, Bridgnorth is the place to see Permian rocks, in fact most of the town is built on it and some of the older buildings are made from it.  The Permian sandstone is also red, shows cross-bedding as the result of wind-blown desert sand, but seems to be a little tougher.  My Triassic samples half crumbled as I was extracting and transporting them.  Again the ancient environment was a desert. 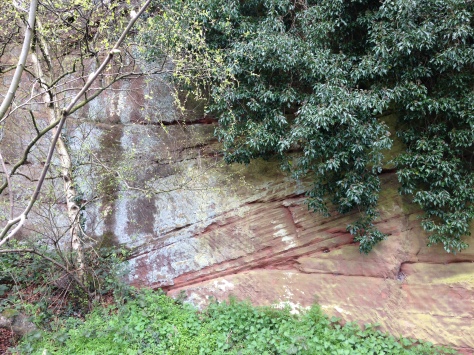 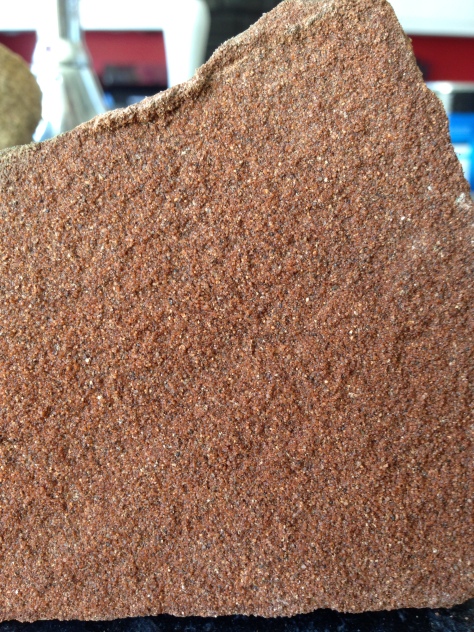 For the Carboniferous Period I’ve chosen something a little special; the Tar Tunnel.  Unlike my other choices this is something of a minor tourist attraction and as such will require the parting of a couple of coins.  It’s found in the east end of the Ironbridge Gorge.  The rock in the surrounding area is a mixture of limestones, coals, sandstones, mudstones, and conglomerates from the late Carboniferous Period.  When the Industrial Revolution was in full swing in Ironbridge a tunnel was built to act as short cut between the mines and the River Severn.  Upon digging the tunnel the walls started to ooze natural bitumen.  This was then extracted for a number of years before the industry moved on.  Is there likely to be an oil rush in Shropshire?  Not likely but it is an interesting phenomenon and one that I don’t think can be seen anywhere else in the UK.  If like me you are a ‘geo-geek’ it’s worth seeing. 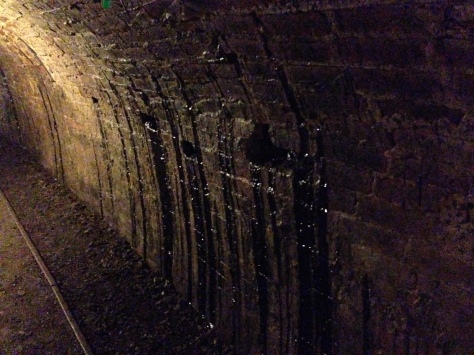 If it was red you’d think you were in a cheap horror movie.  The image below shows an pool of tar in a side chamber. 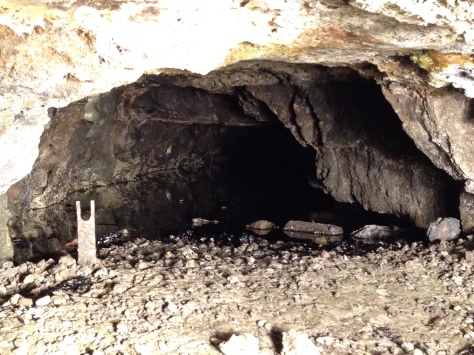 For a more mundane sample from further up the gorge (Jigger’s Bank) you can see an exposure of the Lydebrook Sandstone.  This layer is made up of a pebbly sandstone and includes layers of conglomerate, and was what I used in the geological timeline above. 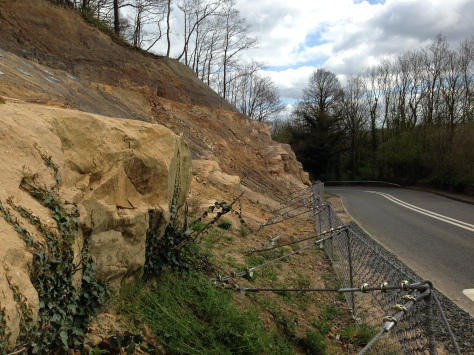 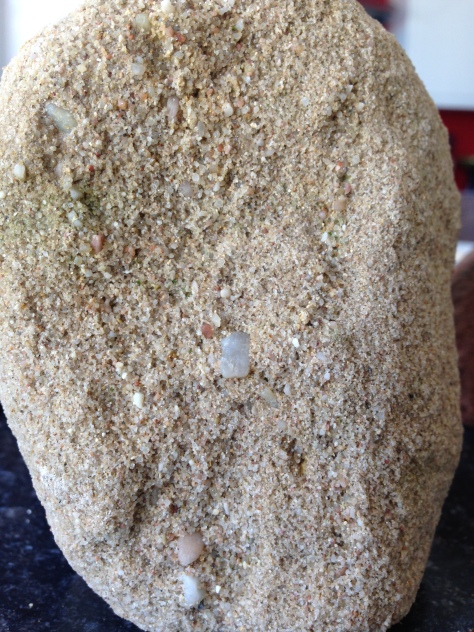 Devonian rock actually forms the bulk of Shropshire’s tallest hill; Brown Clee Hill (not to be confused with the neighbouring Clee Hill or Titterstone Clee Hill).

Below is an image of Brown Clee Hill taken from the Wenlock Edge. 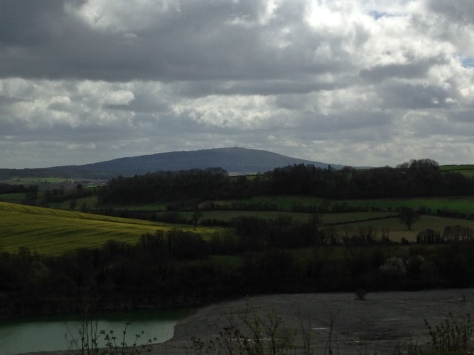 The Silurian is very well represented in Shropshire.  One of the best formations in the county (and possibly the country) to see rocks of Silurian age is the beautiful Wenlock Edge.

The Edge is an escarpment that runs for almost 20 miles in a north-east to south-west direction and is made up of of a knoll-reef limestone with lime-rich mudstones & shales surrounding it. 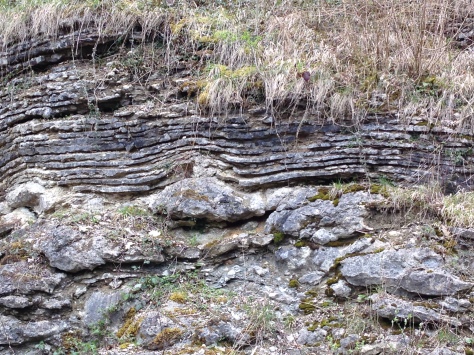 There are numerous walks along the Edge and due to the old (and current) quarrying activities there are plenty of places to see the local geology.  The above picture showing some wonderfully defined bedding planes.  It is also a good place to go fossil hunting.  There are several places both on and under the Edge were you can collect some nice samples like the one shown below. 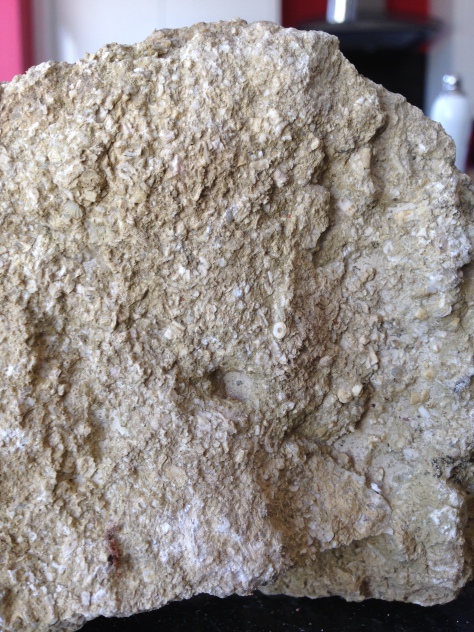 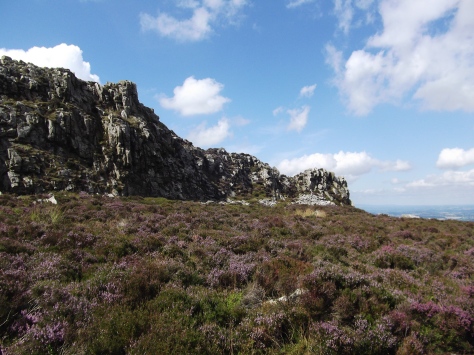 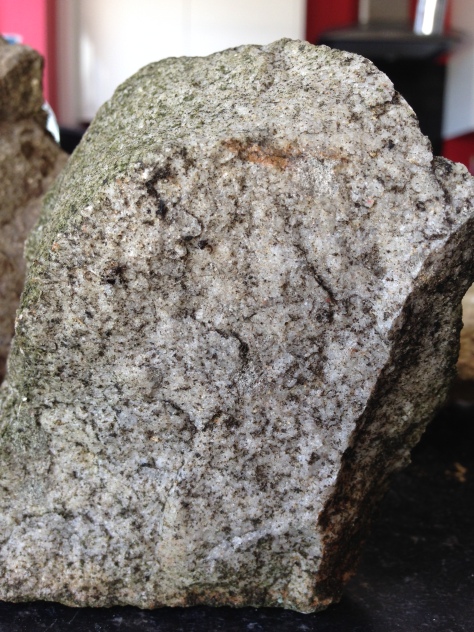 The Cambrian witnessed a massive diversification of animal lifeforms (often called the Cambrian Explosion) and there some good locations and rocks to be seen in Shropshire.  The Ercall quarry has some wonderful quartzite to sandstone formations, showing beach ripples, conglomerates and inclined strata (see my Ercall post for more) 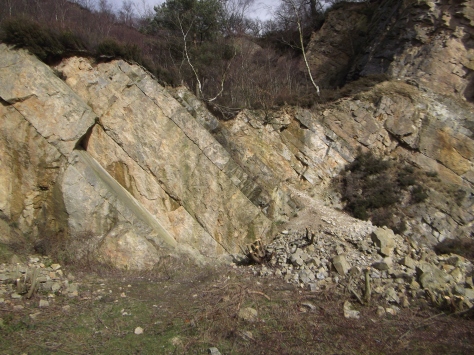 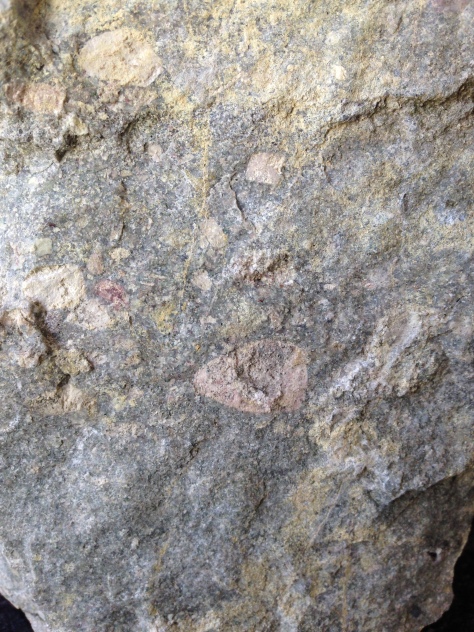 The Wrekin Quartzite gives way to the Comley Sandstone.  The type site is the sadly neglected Comley Quarry (located on the north-east slope of Caer Caradoc) where Shropshire’s first Cambrian trilobites were found.  Unfortunately the rock faces are now overgrown and difficult to see.  It can be seen in better condition a the Ercall. 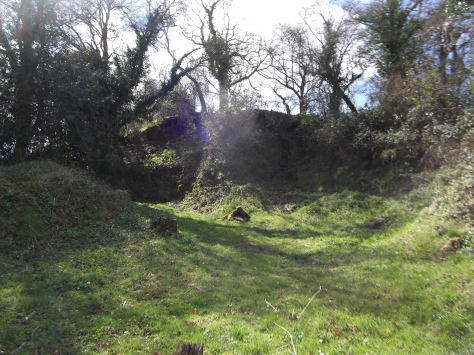 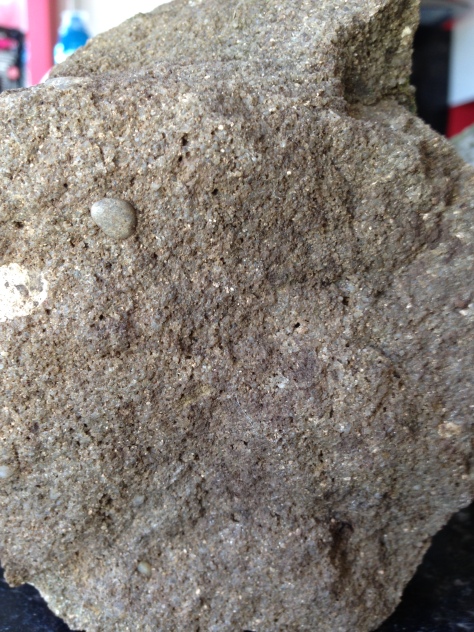 Being such a long eon the Precambrian goes from the formation of the earth to around 542ma.  The Precambrian rocks in Shropshire are mostly from towards the younger end; around 570ma with the gneiss and schist of Primrose Hill possibly being older.  My choice for the Precambrian is the Uriconian Volcanic formation which makes up a number of hills, including the Wrekin, Caer Caradoc and the Lawley. 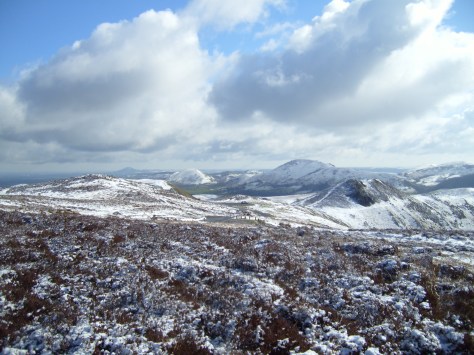 This photo was taken from the Long Mynd (itself a sedimentary formation from the Precambrian) showing Caer Caradoc (centre right), the Lawley (centre left, and a bit in the distance) and on the left horizon is the Wrekin.  These hills are made up mostly of rhyolite, andesite and basalt.

Below is a sample of basalt from the Wrekin. 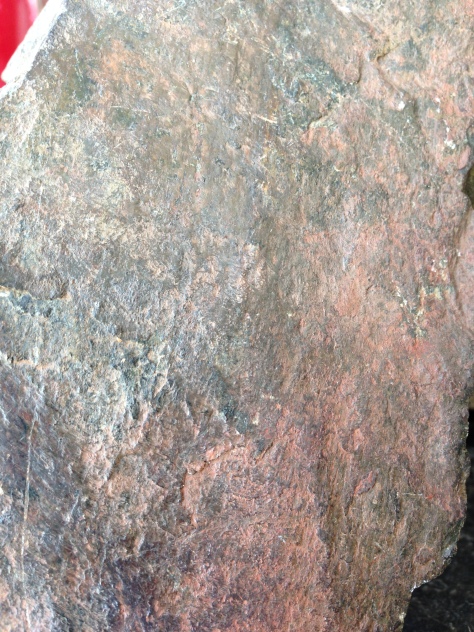 Well there you have, a brief geological tour of Shropshire.  The county has seen volcanoes and beaches, deserts and tropical seas and now the efforts of an enthusiastic geo-geek.  Hope you enjoy.