There has been a new announcement from the world of dinosaur palaeontology; after almost a decade of putting the pieces together we can finally reveal the shape of Deinocheirus.  For those not family with this creature, Deinocheirus mirificus was first discovered in 1965 (formally named in 1970 by Halszka Osmolska and Ewa Roniewic).  The original fossil was found in the Nemegt formation (70ma)  in Mongolia and was just a set of forelimbs as shown in the featured image above (taken from Wikipedia).  These arms are a considerable length (2.4m), hence the name Deinocheirus or “terrible hand”.  The rest of the dinosaur was unknown and it has at times been placed with the Dromaeosaurs or Therizinosaurs, before being tentatively group with the Ornithomimosaurs due to similarities in the arms & hands (Weishampel et al.).  This however was not a certainty as there were some differences  in the radius and the ulna, as well as a few other locations (Weishampel et al.).

Due to research done on two new finds from 2006 and 2009 a Korean team led by Yuong-Nam Lee has finially revealed a complete image of the creature. 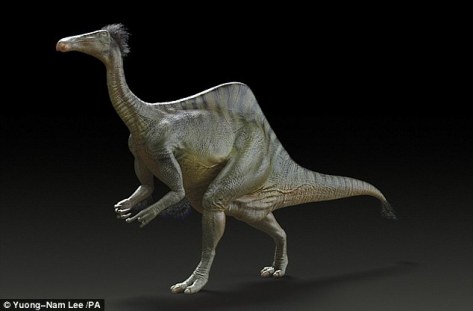 D. mirificus has been confirmed as an Ornithomimosaur, the largest known one at 11m in length.  It does however include some interesting features;

“[It] has many unique skeletal features unknown in other ornithomimosaurs, indicating that Deinocheirus was a heavily built, non-cursorial animal with an elongate snout, a deep jaw, tall neural spines, a pygostyle, a U-shaped furcula, an expanded pelvis for strong muscle attachments, a relatively short hind limb and broad-tipped pedal unguals.”          – Yuong-Nam Lee et al. (Nature 22/10/14)

So overall not quite what people were expecting, but still in the general area.  As for D. mirificus lifestyle the presence of both fish remains and numerous gastroliths in the stomach region suggest a omnivorous diet in a semi-aquatic environment.  This is similar to other Ornithomimosaurs, with other species (such as Sinornithomimus) having gastroliths and fine-combed filter feeding strainers such as those found in Gallimimus (Weishampel et al.).  To be honest this doesn’t surprise me.  The connection between Deinocheirus and the other Ornithomimosaurs has been long suspected, as has their omnivorous diet.  The only that really surprised me was the hump on its back, the purpose of which is still a bit of a mystery.  Other dinosaurs have similar humps/sails made from elongated neural spines and there is still much debate over the exact nature of the feature.  The popular ideas being that it was used for either sexual/territorial display or for body temperature regulation.

On more thing I would like to add is be careful of the media and how they represent science.  I was first alerted to this announcement via Sky News which titled the article “Duckbilled Dinosaur Looked Like Jar Jar Binks” (Sky News Website & iPhone App 23/10/14).  I have problems with this.  First of all it’s much better looking and certainly more relevant to…well anything than Jar Jar Binks (oh come on we all like to pick on that Star Wars character).  Secondly – and for me most importantly – is that they misidentify it.  By calling it a duckbilled dinosaur they are implying that it is a Hadrosaur, commonly called duckbilled dinosaurs due to their beak being broad, flat and…well shaped like a duck’s bill.  This it most certainly not.  Take a quick look on Wikipedia for something like a Hadrosaurus or Edmontosaurus and you’ll quickly realise the difference.  In the article itself they also say it “is a relative of the ostrich belonging to the dinosaur branch often known as ostrich dinosaurs.”  Well that makes it a completely different Order of animal to the Hadrosaurs, but at least that line is half-correct.  D. mirificus is a member of the Ornithomimosaurs – often called the Bird/Ostrich mimics – with some of its members being called Ornithomimus (Bird Mimic), Struthiomimus (Ostrich Mimic) and Gallimimus (Chicken Mimic), due to their superficial resemblance to birds.  They are however not thought to be the ancestors of birds, more like distant cousins.  The exact connection between birds & dinosaurs is still up for debate but is thought to be closer to Maniraptora like the Troodonts, Dromaeosaurs or Alvarezsaurs rather than the Ornithomimosaurs.  Knowing evidently more about dinosauria systematics than the person who wrote the Sky News article I had to do a little digging as they didn’t even mention which Journal it had been published in.  This took me to the Daily Mail who had a much better write up of D. mirificus and then onto the actual Journal article in Nature.  Moral of the story; check the sources for yourself.